Our team in Bosnia and Herzegovina

Author
Ingrid Macdonald
RCO
UN Resident Coordinator
Ms. Ingrid Macdonald (Australia) assumed the position of the UN Resident Coordinator in Bosnia and Herzegovina in April 2020. Ms. Macdonald most recently worked at the UN Office for the Coordination of Humanitarian Affairs (OCHA) as Deputy Director for Operations and Advocacy overseeing the Asia Pacific region. At OCHA, she was also head of the Ukraine office and a Director with the Peer-2-Peer Support Project supporting Humanitarian Coordinators and country teams strengthen their collective delivery of humanitarian response. Prior to joining the UN, she served in leadership positions with international non-profits, the private sector and government for 19 years. She worked for the Norwegian Refugee Council as Representative in Geneva and held positions in Afghanistan, Norway and Pakistan. She recently published her book: “Humanitarian Action and Counter Terrorism in the Muslim World”. 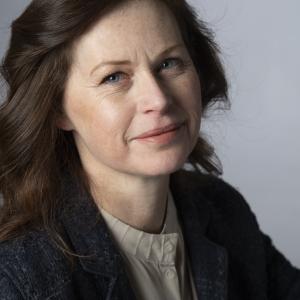 Author
Ardanela Ridzalovic
UNV
Country Coordinator
Ardanela Ridzalovic is UNV Country Coordinator for Bosnia and Herzegovina. She has led and managed the UNV Field Unit since August 2018. She is responsible for effective strategic planning, leading mobilization and placement of UN Volunteers, operational support to volunteers, and advocacy and positioning of UNV interests in the country. She holds an MA in International Relations and Diplomacy from the Faculty of Political Sciences, University in Sarajevo. Prior to joining the UNV Field Unit, Ardanela gained expertise in project management while working for the British Embassy in Sarajevo, BiH Ministry of Defence, and through NGO engagement. 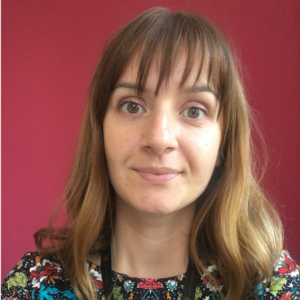 Author
David Saunders
UN Women
Representative
Mr. David Saunders has 20 years of experience with the United Nations. He has served as UN Women Representative since 2013, currently in Bosnia and Hercegovina, and previously in Albania. He held key roles working for government in Oman, with IRC in The Netherlands and the private sector in Brazil, Malaysia and the UK. David joined the UN in the early 1990s when he led a range of operations with UNOPS, UNDP, UNFPA, OCHA and UNMIS. His experience in 11 countries includes information services for humanitarian coordination in crises around the world; UN coordination across Southern Sudan where post conflict, humanitarian and development efforts were simultaneously ongoing; and in Afghanistan, focused on census operations, the health sector and establishment of the first government information systems. 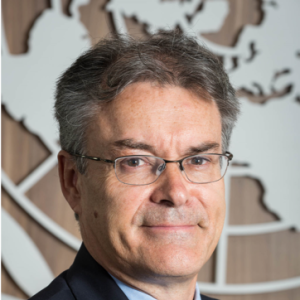 Author
John Kennedy Mosoti
UNFPA
Representative for Bosnia and Herzegovina, Country Director for the Republic of North Macedonia and Serbia, and Director for Kosovo (UNSCR 1244)
John Mosoti is a national of Kenya, and holds Bachelor of Laws degree, Post-Graduate Diploma in Law, a Master’s Degree in Criminal Justice and Diploma in International Environmental Law. John is an established diplomat, having served as Senior Adviser for Human Rights, Social and Humanitarian issues at the Permanent Mission of Kenya to the UN from 2004 to 2013. He was also charged with the work relating to the functional commissions of the Economic and Social Council (ECOSOC), the Executive Boards of UNDP/UNFPA/UNOPS, UNICEF and UN Women. He specialized in peace and security issues, particularly in the Great Lakes region of Africa and on UN Reform. Most recently, he was appointed and served as Deputy Global Coordinator on ICPD 25 charged with the organization of the Nairobi Summit: Accelerating the Promise. 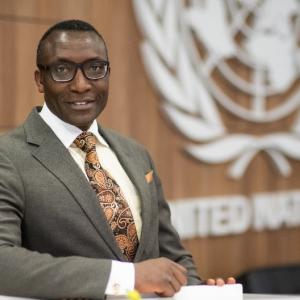 Author
Laura Lungarotti
IOM
Western Balkans Coordinator and
IOM representative in Bosnia and Herzegovina
Ms. Laura Lungarotti (Italy) officially assumed the position of the Sub-Regional Coordinator for the Western Balkans and Chief of Mission of IOM Sarajevo in January 2021.
Ms. Lungarotti has over 17 years of experience working with IOM in Geneva, Egypt, Yemen, Morocco, Senegal/ West Africa and Mauritania. Prior to her posting in Sarajevo, Laura served as the Chief of Mission in Nouakchott, Mauritania.
She holds a Bachelor’s Degree in Political Science- International Relations from the University of Firenze, Italy and a Master’s Degree in Anthropology of Development from SOAS, University of London. 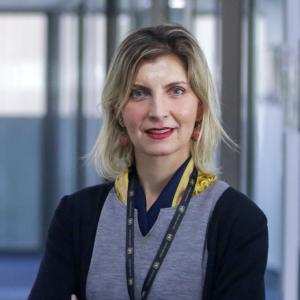 Author
Lejla Tanovic
ILO
National Coordinator
Lejla Tanovic has joined the ILO in 1997, and since 1998, she has served as ILO National Coordinator for BiH. Ms. Tanovic is responsible for a variety of national coordination duties, including liaison duties to support the Decent Work Technical Teams (DWT) in facilitating the strengthening and implementation of the Decent Work Country Programmes (DWCPs). She has 30 years of professional experience, including in international development cooperation, with wide knowledge in strategic planning and management, and International Labour Standards. Prior to joining the ILO, Ms. Tanovic worked with public companies on labour relations. Ms. Tanovic holds a Bachelor degree in Legal Science of the University of Sarajevo and the University of Trieste, and a Master in “State Management and Humanitarian Affairs” from the University of Sarajevo, Belgrade, and University of Rome “La Sapienza”. 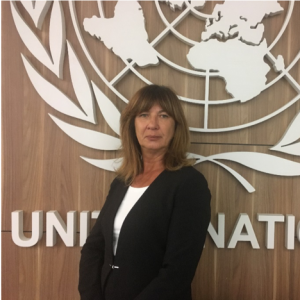 Author
Lucie Gagné
UNHCR
Regional Representative
Ms. Lucie Gagné assumed the position of the UNHCR Representative in Bosnia and Herzegovina in February 2020. Ms. Gagné, a national of Canada, brings 25 years of experience in refugee, asylum, and migration policy as well as international humanitarian and human rights. Mr. Gagné joined UNHCR in 2004 as a Regional Resettlement Officer in its Regional Representation in Accra, Ghana (2004-2008). From 2008 to 2020 she served in various UNHCR operations in Africa (Kenya, Regional Representation for West Africa, Libya) and in the Middle East (Jordan). Prior to joining UNHCR, Ms. Gagne held key roles with the US Refugee Resettlement Program; served as Head of Office in Senegal (1998-2001) and then as a Deputy Director for Operations for West Africa and Central Africa, based in Ghana (2001-2003). She also worked as a Field Office Coordinator with a UNHCR partner in Senegal (1995-1997).

Author
Rownak Khan
UNICEF
Representative
Prior to her current appointment, from 2014, Dr. Khan served as the Deputy Representative in UNICEF Nepal, providing strategic guidance, leadership, implementation and monitoring of UNICEF supported-programmes including humanitarian action. She also served in New York with UNICEF, providing overall leadership on a joint UNICEF, WHO and UNFPA Global Programme for Elimination of Maternal and Neonatal Tetanus, in the Polio Eradication Programme at UNICEF's NY Headquarters, and implementing health and nutrition programmes in UNICEF Afghanistan. Dr. Khan first joined UNICEF in 1996 as Project Officer in Bangladesh. She has a Master’s degree in Public Health from the London School of Hygiene and Tropical Medicine, London and a Bachelor’s degree in Medicine from Dhaka Medical College, Bangladesh. 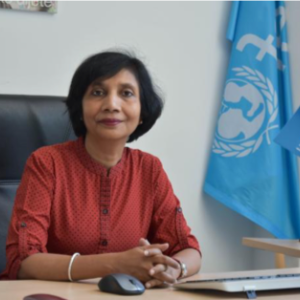 Sinisa is Head of the Antenna in Sarajevo of the Regional Bureau for science and Culture in Europe and responsible for the implementation of UNESCO’s core programmes and activities in Bosnia and Herzegovina. He also supports the development and implementation of programmes and participation in UN development/cooperation frameworks in Serbia and Montenegro, as well as in other countries of the region, as required. He has an academic background in civil engineering. He joined UNESCO in 1995. 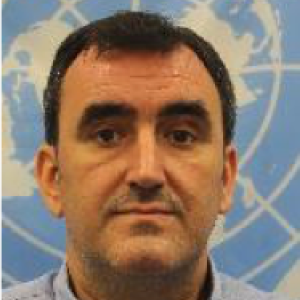 Author
Sonja Jakic
UNDSS Security Advisor
Sonja Jakic, UNDSS Security Advisor in Sarajevo, Bosnia and Herzegovina, originally from Slovenia. Read Law at the University in Belgrade followed by master’s degree in Anthropology, University of Ljubljana, Slovenia. Joined UNDSS in 2009 after 27 years of work experience in national diplomatic and security services. Before being appointed to Sarajevo, served in Darfur Sudan and Dadaab Kenya. As SA in UNDSS Office in Sarajevo she has regional responsibilities (Moldova, Croatia, Czech Republic and Poland). 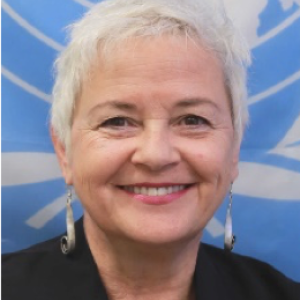 Author
Steliana Nedera
UNDP
Resident Representative
Mrs. Steliana Nedera assumed her duties as UNDP Resident Representative in Bosnia and Herzegovina in May 2019. Prior to this, Mrs. Nedera undertook three separate assignments as UNDP Deputy Resident Representative in Serbia (2014-2019), in Kosovo* (2011-2014) and in Kazakhstan (2007-2011). She joined UNDP in 2004, as Assistant Resident Representative with the UNDP office in Moldova. Mrs. Nedera’s experience prior to joining UNDP was with DFID as Head of the DFID office in Moldova (2000-2004) and with private foundations on the development of civil society and the media (1996-1999). Mrs. Nedera holds a Master's in Development Management, currently studying towards a second Master’s in Global Diplomacy and has a Bachelor in Law. *All references to Kosovo should be understood in full compliance with UN Security Council Resolution 1244 (1999). 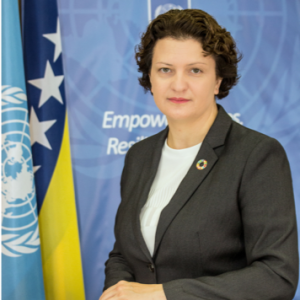 Author
Victor Olsavszky
WHO
Representative
Dr. Victor Olsavszky is Romanian physician specialized in Public Health, holding a master degree in management of social and health services and a PhD in medical science. His career in Public Health began in the Ministry of Health of Romania as the director of international cooperation representing, and was involved in and contributed to health care reforms in his country from that position. Afterwards he joined WHO and led the WHO office for Romania. Since January 2016 Dr. Olsavszky is representing WHO in BiH, where he manages the country office in Sarajevo, is part of the UN Country Team, facilitates and provides technical support to health authorities, and acts as a focal point to the international community on health matters in BiH. 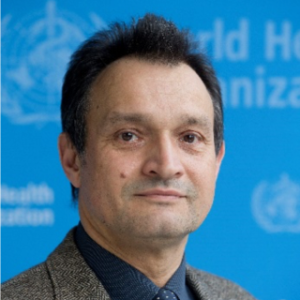 Author
Vlado Pijunovic
FAO
National Project Officer
Mr. Pijunovic was born in Zavidovići on 29 March, 1970. He holds a Bachelor of Economics, Faculty of Economy, from the University of Banja Luka. He was a Team Leader with CARE International (1997-2000), and then Director of the Economics Department with Mercy Corps Scotland (2000 - 2003). He was then senior programming officer at the European Union Delegation to BiH, Cross Border and Agriculture Programme (2004-2011), and is presently the National Programme Coordinator at UN’s FAO, a role he began in 2012. 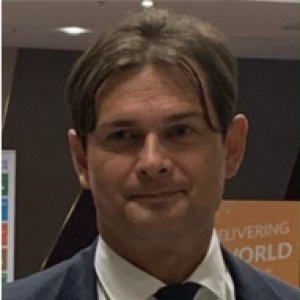