Let's stand up for equality, justice and human dignity

The UDHR is a milestone document that proclaims that inalienable rights to which everyone is inherently entitled as a human being - regardless of race, color, religion, sex, language, political or other opinion, national or social origin, property, birth or other status.  It was conceived as a map to guide citizens of the world out of conflict and suffering and to ensure that relations within societies, and between states, can be peaceful.

The Preamble of the BiH Constitution sets forth its determination to fully implement the UDHR for all citizens throughout the country.

Wherever respect for the commitments of the UDHR have been genuinely adhered to, the suffering of people has been diminished; their dignity, lifted up; and foundations of peaceful, respectful and inclusive communities strengthened.

In times of turmoil and uncertainty – such as we are currently experiencing around the globe – the Declaration is more relevant than ever. The world is facing many serious challenges simultaneously:  climate change, rising economic and social inequalities, migration, increased intolerance, distrust and rhetoric of division, the erosion of accountable governance and judicial independence, threats to freedom of expression and the rise of mass surveillance and artificial intelligence. At the core of all these challenges are our civil, cultural, economic, political and social rights.

Preventing or mitigating negative trends and outcomes requires all of us to work together, within the framework of international human rights law – a framework that has demonstrated great success in achieving beneficial results for all.

Thus, to move forward, we need to push back together.

To push back against agendas of hate and division; by shining a light on the values of the Universal Declaration – the fairness, and dignity which sustain the wellbeing of all humanity.

To push back against the vilification of targeted communities with the clarity of principle and truth.

We all need to reinforce the culture of respect and recognize the strengths of diversity so that young people will truly understand “the inherent dignity and the equal and inalienable rights of all member of the human family.” Seventy years ago, States acknowledged that this is “the foundation of freedom, justice and peace in the world.”

The United Nations and the Institution of Human Rights Ombudsman/Ombudsmen of BiH will continue to work in support of the citizens of Bosnia and Herzegovina toward the improvement of human rights in the country. 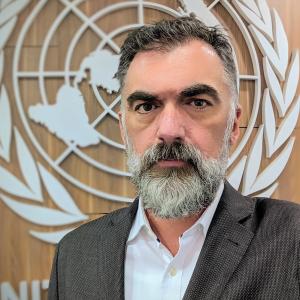