Building a climate-resilient future for Bosnia and Herzegovina

We welcome the submission of the updated Nationally Determined Contributions (NDCs) to the UN Climate Change Secretariat, published on the 20th April 2021, as a significant milestone for Bosnia and Herzegovina under the Paris Agreement. In February, United Nations Secretary-General António Guterres underscored that 2021 is a 'make or break year to confront the global climate emergency', and called on all countries to submit stronger, more ambitious national climate action plans.

NDCs are a country's commitments to the rest of the world to reduce greenhouse gas emission and Bosnia and Herzegovina’s revised goals, call for a reduction of emissions in the country by over one-third by 2030 and almost two-thirds by 2050 compared to emission levels in 1990. This is a significant increase in ambition and a welcome step on the path to COP26, to be held in November this year.

Some may argue that Bosnia and Herzegovina's share of global emissions is small compared to other countries. However, when adjusted to the size of the economy, emissions are nearly five times higher in Bosnia and Herzegovina than in the EU. At the same time, the heavy reliance on coal is felt with every breath citizens take in the winter, causing one of the worst losses of life due to air pollution globally, and causing other persistent impacts on public health, the economy, and daily life. The country is also disproportionately at risk from global warming. Flooding, prolonged periods of droughts, heatwaves, and hail have intensified in past decades, with high economic, environmental, and social costs. 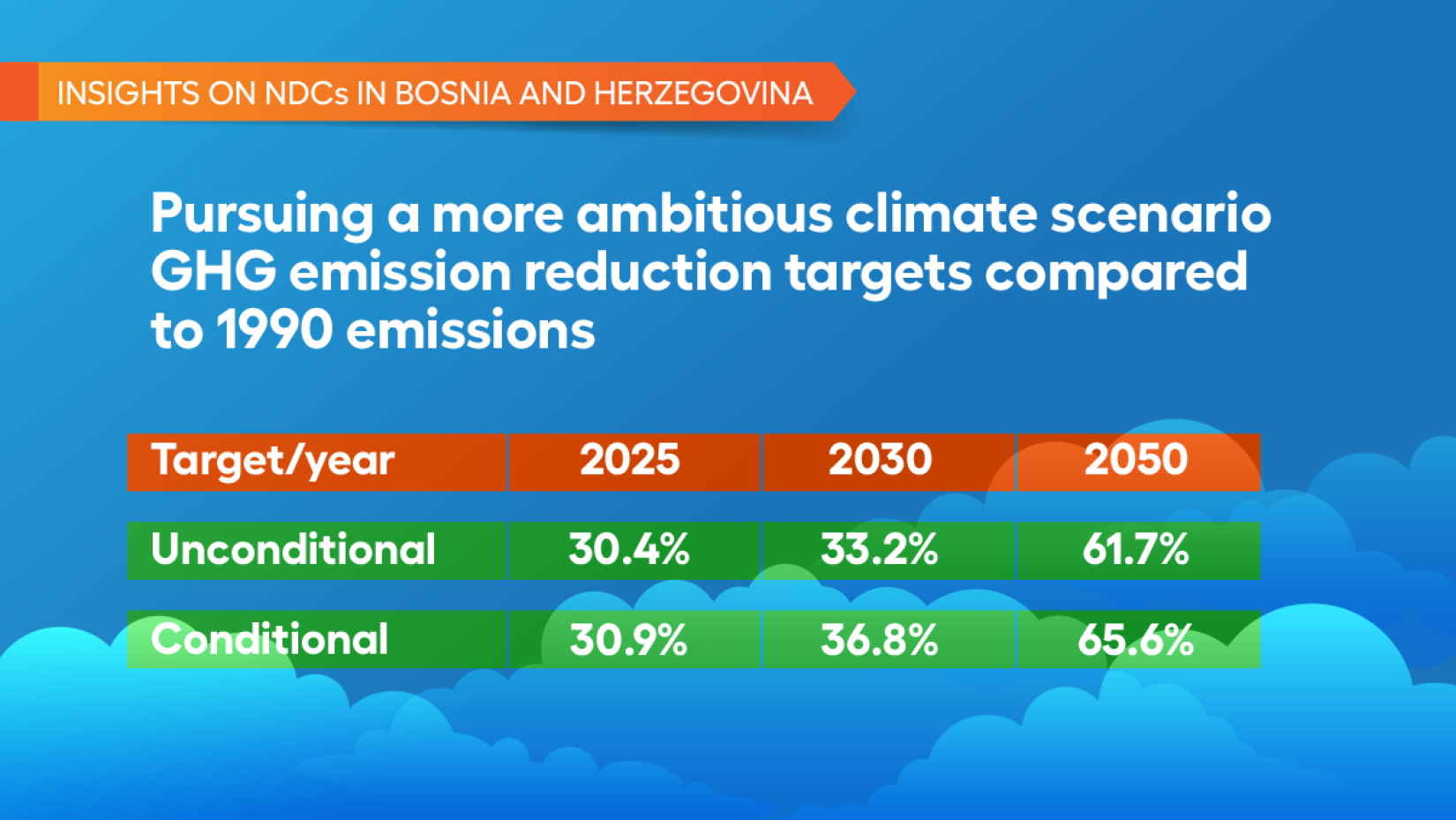 Meeting the goals of the NDCs will require leadership and commitment from all levels of government and society to decarbonise the economy. This cannot be achieved overnight. However, the NDCs offer a framework for green investment and policy that can realise social and economic transformation over the coming decades. Between now and 2030, approximately BAM 17 billion will be required for green energy production. Investment is also needed in water, land use, transportation, industrial processes, waste, and tourism. Policy and legislation will be required to support a transition from coal-fuelled power plants to cleaner energy sources, including, for example, reforming the state-level law on electricity and natural gas and phasing out coal subsidies.

With appropriate public and private action, the NDCs can serve as an engine for Bosnia and Herzegovina’s green, inclusive and resilient recovery from COVID-19. Transition to a less polluting, greener economy is an opportunity to create new, green jobs and improve efficiency. Their implementation will accelerate progress on already agreed targets, such as the priorities identified to advance towards accession to the European Union, and the national framework for the Sustainable Development Goals. 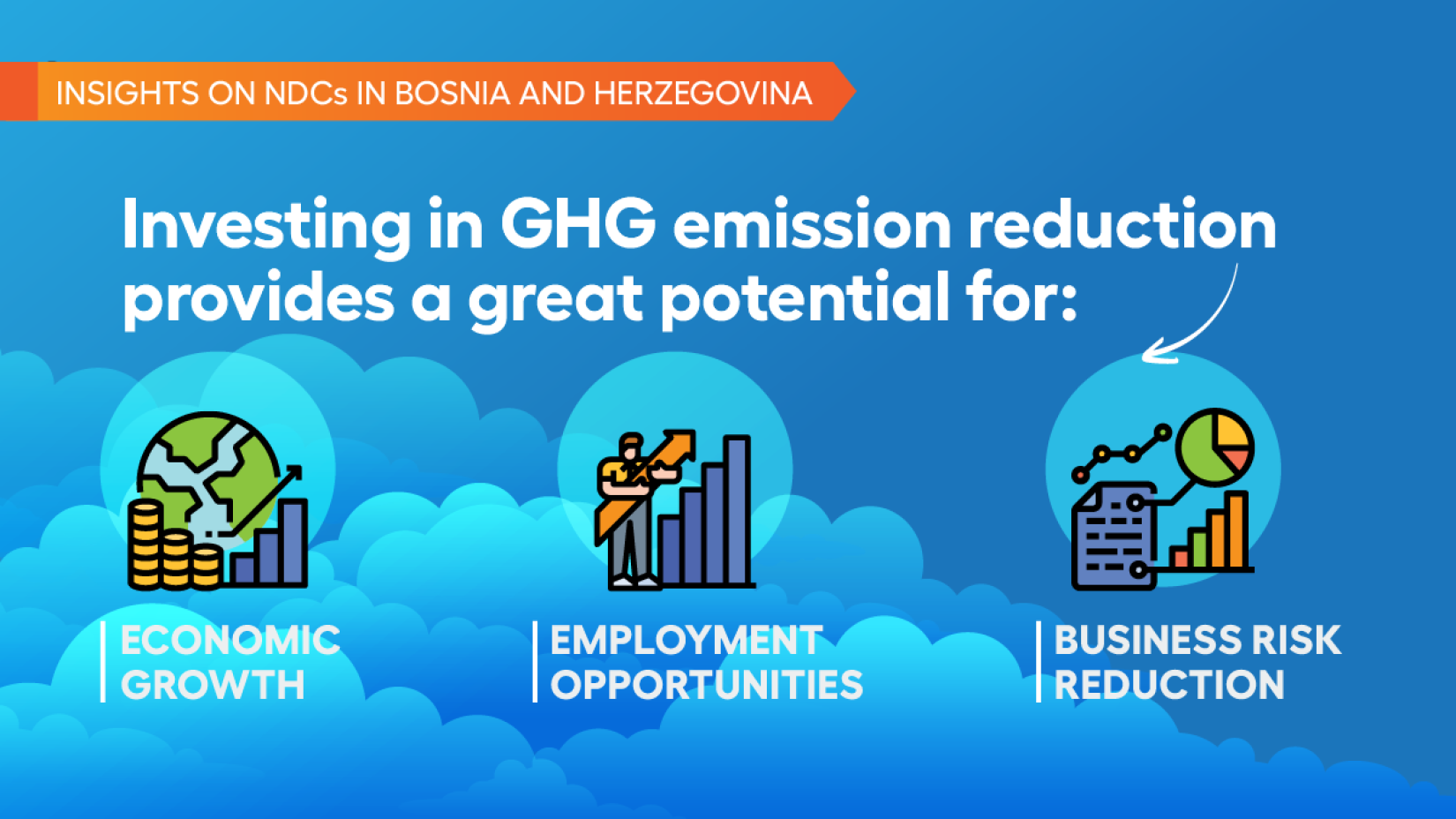 Bosnia and Herzegovina has the potential to exploit significant solar, wind and other renewable energy sources at a time when these technologies are more accessible and affordable than ever before. The production of green energy is already more profitable than the production of energy by coal-fuelled power plants. Companies can reduce their carbon footprint while benefiting from increased productivity and reduced costs. A greener environment also means better health and longer lifespans for the entire population.

We are invested, alongside you, as partners in delivering on Bosnia and Herzegovina’s climate commitments. The responsibility for climate action does not lie only with authorities and businesses. We all have a role in working for climate action, changing our approach to transportation, housing and heating, planting trees and preserving forests and biodiversity, and choosing more sustainable lifestyles.

Each one of us plays an essential role in accelerating change. We must combine our efforts to fight for cleaner air, water and soil to reverse the climate emergency and preserve the planet. Together we can make 2021 a year of change, of increased ambition, and renewed commitment, to build a brighter future for all.